After a term of “saving our pennies”, St Christopher’s long-awaited trip to the Hyde Park Winter Wonderland took place on 17th December. The outing began with a visit to the pantomime at the Harlow Playhouse (oh yes we did…) which was enjoyed by all.  After a stop off at McDonald’s we headed to the youth hostel in Lee Valley as this was to be our base for a night. As it is conveniently next to Cheshunt station, we travelled up to London on the overground.

The Winter Wonderland provided the thrills we had expected! We were lucky that the weather was exceptionally mild and the promised rain held off.  However, the trip inside the biggest ice kingdom in the world at minus 10 degrees was a shock to us all!  The sculptures were fantastic but the highlight for most was the ice slide!

The rides did not disappoint – although there were a couple of hurried trips to the toilets after a couple of stomach-churning experiences!  A few lucky ones were delighted to be in a queue behind Prince Harry, with one even getting to shake his hand!

Once the Winter Wonderland closed, the night still felt ‘young’ so we all headed off for a walk down Oxford Street to see the Christmas lights, stopping on the way to admire some of the buskers.  Everyone coped really well with very crowded stations and tubes…and the students were kind enough to offer seats when they became available to the very tired staff!

Obviously, it took a while for the excitement to subside once we arrived back at the YHA.  By 2AM, it was (mostly) silent so the staff could finally get to bed! However, everyone still managed to get up for the hearty breakfast before heading back to school for the last morning. 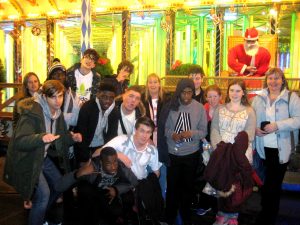 Earth Day 22nd April 2016 On Friday, leaders from 160 countries will officially sign the…

A thought for the Summer term