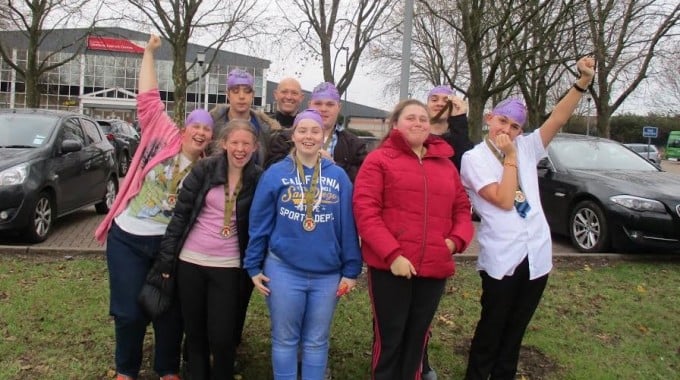 On the 3rd of December, the St John’s swimming team made the trip to Newham leisure centre for the Panathlon challenge. The event had schools competing from all across east London, In 8 different events.

The first event was the 25 metre freestyle race, contested by one of our strongest swimmers, Nathan Pain. From the gun Nathan kicked off strongly, finding his stroke with ease. Across in lane 1 however, a swimmer from Trinity also had a strong stroke and was just beating Nathan by a stroke. Nathan swam with all his might but the swimmer that we nicknamed The Shark narrowly beat him into second position. Next up was Kara Harrison in the 25 metre backstroke. We knew straight away that the race was going to be tough as the Shark lined up in the next lane. Kara’s start was the quickest and at the half way point Kara was in the lead. Her technique was excellent, however, from out of nowhere, The Shark (who we later found out was a county swimmer) hit a rhythm and her class showed through nudging Kara into second place. Harry Hayes lined up for us next in the 15 metre freestyle swim. Harry looked confident entering the pool and finding his position. On the gun Harry picked up his superb front crawl and motored down the pool. His sprint could not have been better and Harry swam through to win the race. Bethany Hennessey then took to the water shooting away in the float race. Bethany did not only maintain the lead throughout but was also able to maintain a huge grin. Bethany came home in first position at least 5 metres in front of the next competitor.

We then entered the team events with Kyle Brown, Tommy Parsey, Amy Michelle and Isobel Edwards competing in the treasure hunt. The teams had 2 minutes to collect as many items from the pool as possible. The items were either floating on the water or on the bottom of the pool with double points being given to the weighted items. Our team worked like a well-oiled machine, all of our team being able to dive down like fish and collected a huge bundle of treasure. Things got even better in the ball pass race where we, to use Kara’s phrase “smashed it”. Finally we entered the last race which was the float race. The feeling in the camp was a top three position should put us in a medal position. We fielded a strong team for this race as it was quite arduous, moving floats from one side of the pool to the other before returning as a team pushing a large float. Kyle Brown masterminded the swim, telling the team the best way to collect the floats. Our team dug in hard following Kyle’s direction, working as a team, in a display that I can only describe as astonishing. On the home swim we were neck and neck with Whitefields, but in this mood our team were never going to be beaten on the line and we pipped Whitefields winning the race. We listened to the medal ceremony feeling like we had done enough to take a medal and as the teams were called out we were left in the final 2 with Trinity. The speaker called out and the winners of the East London Panathlon are……….St Johns! We won the competition and in doing so qualify for the Southern area finals that will be held at the aquatic centre, Olympic park in June.

The Diocese Of Brentwood Citizenship Award

This morning we had a visit from the bearded gentleman himself Father Christmas. He was…