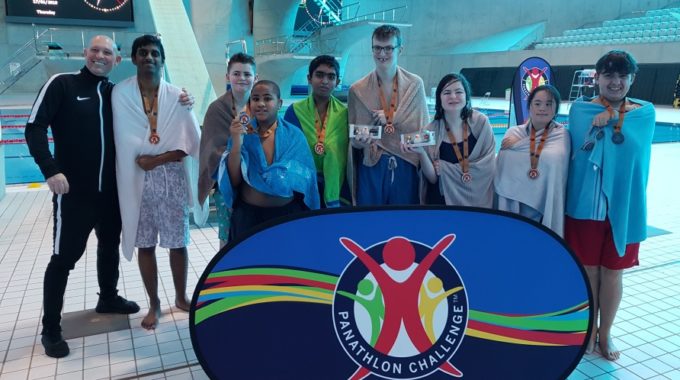 On 17th January 2019 the St John’s Sticklebacks swimming team made their way to the Olympic Park in Stratford. We were competing once again in the first heat of the Panathlon challenge. It was a very cold day with the first signs of snow in the air as we made our way across east London to the Olympic Park. The weather however did not dampen the mood on the bus and our team arrived in good spirits. We arrived in good time and on booking in were given our team hats: St Johns would swim in our school colours of blue. We changed and went poolside; our team was ready to go!
First to swim for the Sticklebacks was Sophia in the 25 metre freestyle race. She made her way to the blocks accompanied by team manager Nikki and was given her final instructions in what would prove to be a very strong field. As the gun went off, Sophia leapt into the pool and glided through the water. After a tremendous effort and at a great speed, Sophia and the swimmer from Stormont House stretched for the line. Sophia was pipped at the post but earned an excellent second place. Josiah was next to swim, also in the 25 metre freestyle race. Josiah had never competed in a swimming competition before so was obviously nervous. He made his way to the start with coach Gurdip and battled his fears to enter the pool. On the gun, Josiah gave everything that he had and came in third, a magnificent swim. The final individual race (the 25 metre backstroke) fell to team captain Nathan. Nathan was confident and had been in this position before, swimming for St John’s in the previous year. He set himself and on the gun sprang like a salmon. In true Stickleback fashion he led from the front, but the swimmer from Whitefield’s just kept coming. On the stretch for the line, Nathan was beaten into second position – a valiant performance!

The freestyle pair of Sophia and Nathan swam next and midway through the race Nathan was in the lead. He handed over to Sophia and St John’s were hopeful for another decent finish. The pair did not disappoint and we finished in third position. We were swimming well but we needed to catch Whitefield’s and Stormont who were taking most first and second positions. Completely unexpectedly this change of fortune was given to us in the 10 metre float race by Owen. He kicked off from the side and swam like a dolphin, touching the side a good metre ahead of his opposition. Jude also swam in the 10 metre float race and for his first attempt was amazing, giving everything and tipping the wall in third. Going into the team events Isabella, Zahir, Ashvin and Josiah swam in the slam dunk relay. Each swimmer had to swim 10 metres with a ball passing it to the next swimmer. The final swimmer had to shoot and score with the ball, followed by a race to get the whole team back first. Zahir was our last man and threw a perfect basket.

The race back was frantic and too close to call. We were either first or second. Another close call came in the raft race with our four person team coming in the top two. Going into the final event it was all to play for. The treasure hunt is a four person team who are given two minutes to collect as many objects as they can. The objects are floating both on the surface and on the bottom of the pool. For this event we fielded Owen, Nathan, Josiah and Zahir. The team worked like Trojans and it looked like they collected more objects than the other teams. We had put ourselves back in contention and now it was a waiting game: had St John’s make the podium?

After which seemed like an age the results were in. St John’s took third place and a bronze medal. The Sticklebacks had made the podium! Well done Sticklebacks – a gallant performance!

The Aquinas Teaching & Learning Trust, which is made up of a number of primary…