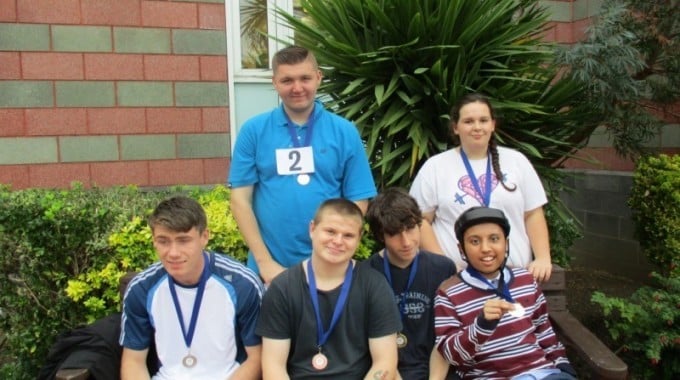 On the 6th of November 2015 the St Johns Athletic Team competed at the Lea Valley London Indoor Athletics Championships. Over the last few months our athletes have sacrificed numerous lunch breaks to train and have shown a real progression. Our team have gone from strength to strength, doubling in numbers from 10 at the very beginning to 21 competing at the tournament today and taking home an impressive 3 gold 1 silver and 2 bronze medals.
The first athletes to compete were the sprinters in the 60m and 200m races. These were very strongly contested races and our athletes did us proud. Louis Bixby and Alfie Jones came an impressive 5th, whilst Harry Hayes, Reece Hinds–Weir and Hassan Magala came very close to qualifying, finishing in third place. Adrian Lukiewicz did however manage to qualify and just missed the medals ending in fourth place.

In the field Kara Harrison was putting the shot. Kara was nervous and her first two puts were judged as no throws. Her third and last put had to be good and as if from nowhere Kara was able to hold her nerve and drive an enormous put firing her to the lead and our first gold medal. Kara started the ball rolling in the field as this was followed by a bronze medal for Brian Allen in the Shot and a bronze medal for Aaron Horide in the javelin. Asvath Thananssayan gave all and finished in sixth place.

In the pit our jumpers were also competing in strong fields with athletes from Enfield and Haringey athletics clubs competing. Joshua Rankin, in the under seventeens came a respectable fifth. This was followed by Liam Donegan and Terrance Tarrow who came forth and fifth in the over seventeen category.

Back on the track Abu Akbar just missed qualification in the 400m however Billy Roberts managed to qualify, winning his heat. The final of the 400m however, was going to be highly competitive as the winners of the 60m and 200m races were also competing. The gun went and billy run hard, he was ahead after the first lap. Coming to the 300m point and Billy was still in the lead. As the line approached Billy began to tire and was just overtaken on the line, beaten into silver medal position. A valiant, brave performance.

Our final athlete in the field was Abidul Islam in the bean bag throw. Abidul was a natural to the throw and was in a league of his own. The other throwers were not able to come close to any of his three throws and Abidul took the gold in impressive form.

This just left Sam Ologan and Paul Steely in the 800m race. Paul was the defending champion in this event as he won the outdoor event in June although this race had more athletes competing. Paul worked the race like a professional, pacing himself, sitting on the leaders shoulder. On the bell Paul made his move and began to up the pace. The field were just unable to stay with Paul who came in 100m ahead of the next competitor in devastating fashion. Sam gave everything and in a very strong field ended in sixth position.
Our Athletes displayed impeccable behaviour coupled with enthusiasm and team spirit and were a credit to St Johns.