This year (October 2015) saw our fourth Shakespeare performance with S.S.F (Shakespeare Schools Festival). Macbeth being our first, closely followed by the Tempest, Othello and most recently Romeo and Juliet. All performed at the Kenneth More Theatre, Ilford.

We really have a seasoned and experienced company of actors/performers now!

As you can see from our S.S.F critical appraisal our Romeo and Juliet performance was particularly well received.

So much so that, this year, we were invited to Number 11 Downing Street to present a scene from our production (Balcony scene). What an accolade for the school but especially for our young performers.

What a day it was!

Opening Statement by Nikky Morgan (Secretary of State for Education)

“Well, turning to St. Johns School with the balcony scene from Romeo and Juliet. What a fresh and original setting with a focussed and wonderfully controlled approach. They achieved a real sense of romantic pathos creating real drama tension for us as an audience….”

This was followed by a mingling of guests, possible sponsors and cast members,  where the students talked to MPs, dignitaries and Heads of Commerce and Industry.

So proud of them!

Then it was back to the school bus, through security once more and home! With a group of exhausted but elated performers.

Many thanks to Dave K (Romeo), Isobel (Juliet) and Dana(Nurse) and their families for all the extra hard work.

Particular thanks to Mrs Silver for her additional time and support.

All in all a wonderful opportunity for the school and an experience that our three performers and indeed the rest of us will never forget. 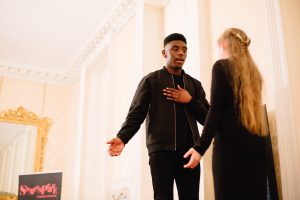 On Wednesday 4th November, at The Kenneth Moore Theatre, students from St John's performed a…