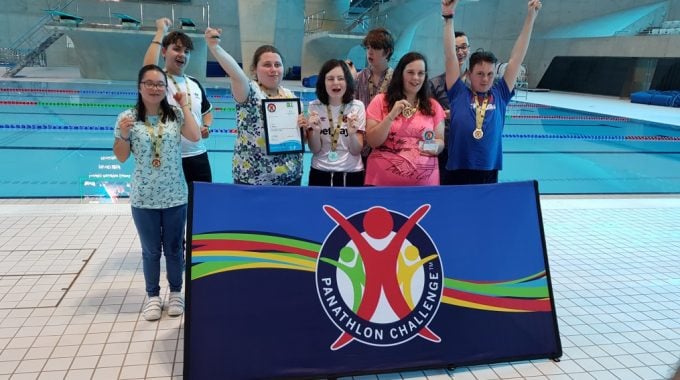 The St John’s Sticklebacks were back in action on the 10th May competing in the finals of the Panathlon swimming competition. Our team of eight travelled to the Aquatics Centre in the Olympic Park to compete against eight other qualifying teams from the south of England. Our team had qualified in second position on a technicality so we were entering the competition feeling hard done by, but confident of a good result. We arrived at the pool in good time and were given our swimming caps. This year the Sticklebacks were swimming in blue and after a quick team talk we were ready to go.

First up for the Sticklebacks was Nathan P. one of our seasoned athletes in the 25 metre freestyle race. An extremely strong field lined up but Nathan seemed unphased. As the gun went off, Nathan was the first off the blocks, gliding through the water like a salmon and won by at least 2 metres. We were off to the best start possible. Alfie followed with a more laboured, powerful stroke but again didn’t disappoint and beat the swimmer from Orpington, Kent by a fingertip. Next up team captain Kara took to the water in arguably the hardest race, the 25 metre back stroke. The race was swum at lighting pace and Kara was beaten on the line by the swimmer from Parkwood to gain a silver position. Bethany and Kara then swam a brave third followed by successive wins from Nathan R. and Harry in the 12.5 metre freestyle events.

At the halfway stage it was all to play for with little separating St John’s and two other teams. The team events followed and the first was ‘Slam dunk’. This was a four-person relay event passing a ball between players with the final swimmer taking a shot at a hoop and the team swimming back in the fastest time. A technical mistake from our coaching staff meant that our strongest swimmers were not placed in the correct position in the pool and the Sticklebacks were beaten into second place. Karen Hennessey was swiftly appointed as the new team coach as we moved onto the raft race. This consisted of another four-person team and no mistakes this time, with Alfie , Kara, Bethany and Isabella all swimming a length with floats followed by a second length as a team pushing a raft. The team blew the opposition out of the water, winning by half a length.

The last race of the competition was the treasure hunt and our team needed a good result to put us in the medal places. The race was a two-minute scramble to retrieve as many objects from the pool as possible, a race that Sophia had competed in before and had a plan for our team to execute. At the final whistle it was impossible to tell who had won. The competition was over and we waited for the final results. Bronze positions were called and St John’s were still in with a shout. We crossed our fingers as the speaker made his announcement: “The winner of the Plate Competition 2018 is…… St John’s!”. The Sticklebacks had only gone and won the Panathlon Swimming Championships!

The Aquinas Teaching & Learning Trust, which is made up of a number of primary…